I spent several years shooting weddings entirely on my own. I used to see other photographers offering packages with a second photographer and I thought it was just a reason to get more money out of brides and grooms. Then, I started to think it might take some work-load off of me, so I trained a friend of mine who was very interested in photography about how to get the shots I was looking for.

To my pleasant surprise this worked wonderfully and I regret not having done it sooner!

The results were amazing. For starters I wasn't running around like a crazy person to cover all of the angles, so I felt better after a wedding. Then having a backup gave me more confidence to push harder for better shots because I knew I had a safety net with the second photographer getting the known-good shots anyway. And soon after that we started a friendly competition to better each other at each opportunity.

No longer we were just content to be just backups of each others shots and both shoot the same thing, we wanted to see our pictures in the album, not the other persons' pictures. This competition lead to better photos, and there was no turning back.

Today, we have several people on the staff who work as a second photographer. This gives us the flexibility to overcome someone being ill or vacation schedules, and it brings in differing views. The competition amongst ourselves has gone up even more now. "Oh, wow, that's a great idea to do THAT!" "Hey, I'm going to try that next time."

Plus, since I can't be in two places at once, I no longer have to worry that from my angle I can only see the groom's back when he puts the ring on his bride - the other photographer from the other angle ensures we don't miss. And, having two angles of the same event from the exact same time is a lot more interesting in your album than a page of photos all shot from the same fixed position.

For example, look at these photos of the ring ceremony from the same wedding. These two shots were taken a second apart but add a lot more interest paired together than either shot could achieve on its own. 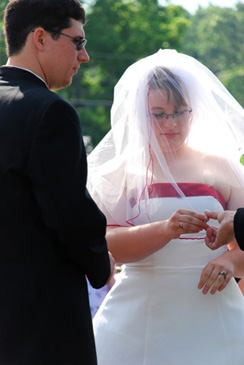 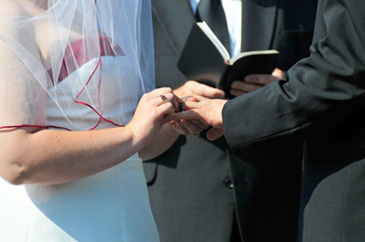 And what event could be more perfect for two angles than the bouquet toss and garter toss? Check out these examples where again, nearly the same point in time is captured from two different angles which really helps to tell the story. 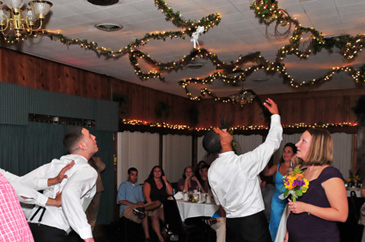 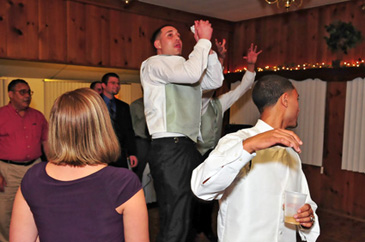 Consider this impromptu bouquet toss that a bridesmaid did during the introductions at a reception. No one expected this was going to happen, but having two photographers ensured great coverage of the bouquet being tossed, hanging in the air, and being caught. 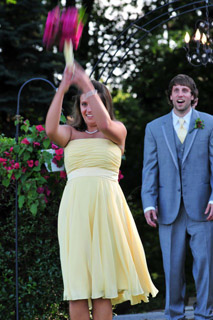 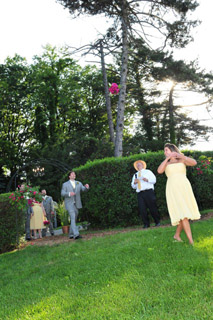 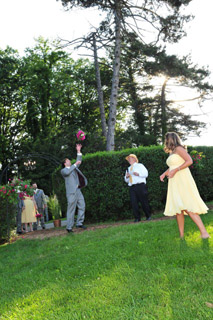 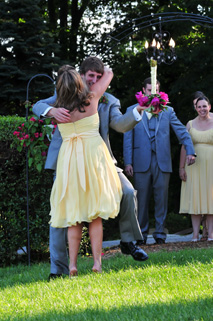 Want more? Okay, here's an example of the all-important "You may now kiss the bride." We have the shot from the front showing the couple full-length and another shot with the reverse angle getting a close-up. Here we aren't simply seeing two different angles, but two different locations entirely - both taking photos at the exact same time. 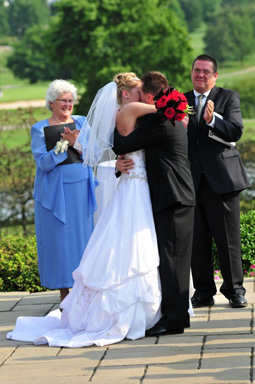 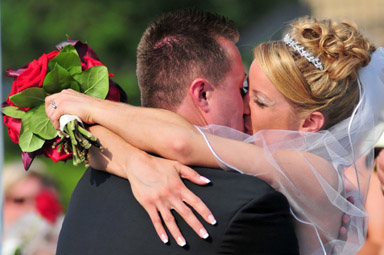 One word of warning. Some studios do offer packages with multiple photographers. I have seen some and sadly they just stand next to each other taking the same photo. I don't see how this is of great benefit unless one of the photographers is so new that they aren't yet taking good photos, but it still seems like a waste.

The way we work is that we are usually 90-degrees apart so we are not in each other's shot, nor are we just shooting the same photo. This provides a variety of angles and keeps the photos looking fresher and not all taken from the exact same angle over and over.

Back to the wedding package.